Happiness is linked to higher creativity

Happiness is linked to higher creativity

Many people have the stereotype of a creative person as someone who is broody, weird and possibly a little depressed.

But according to research, the opposite might actually be true.

Numerous studies have looked at what sort of mood results in people producing their most creative output.

And the results are overwhelmingly clear:

Being happy is good for your creativity.

One study from 2008 of 171 students found that people’s happiness was significantly related to their ability to come up with ideas. This was also shown in a 2021 study of 722 high school students in Lithuania. And other research has shown that when people are put in a good mood by seeing or listening to something funny, they become more creative.

In fact, a 2009 meta-analysis of 72 studies looking for links between positive mood and creativity found a strong relationship between the two.

Another 2008 meta-analysis of 102 studies found that the type of mood people were in directly affected their creativity. If someone was in a positive mood but with no drive towards activity (such as by being relaxed), they were not as creative as someone who was joyful and driven towards activity (happiness). The opposite was also true: Sadness was not linked with being more creative, and anxiety / fear made people less creative. So real happiness is better for getting creative work done than being relaxed, although let us not forget that relaxation and mindwandering also have their part to play in generating ideas.

Another 2017 study by Dr Simone Ritter found that simply listening to happy music made people perform better at divergent thinking tests which measure someone’s ability to come up with lots of original ideas.

Interestingly, other studies from 2015 showed that being in a positive, happy mood made people perform better at divergent thinking, but not necessarily convergent thinking. So while happiness may help you generate lots of ideas, it does not seem to be as powerful when needing to spend time, effort and focus improving those ideas and turning them into a final output.

Interestingly, another study from 2015 found that people’s capacity for how creative they could be was not correlated with their overall happiness. This would indicate that happiness and creativity have a more short-term interaction, with happiness perhaps making it more likely that someone will engage in creative activities, thereby producing creative output, while also making them better at coming up with more original, divergent ideas during that time.

This is backed up by another study from 2014. Here participants were randomly sampled and asked how they were feeling and what they were doing at that moment. There was a strong correlation between those people who said they were doing something creative, and them feeling happy at that moment. So there is a relationship between feelings of happiness and creative activities.

It could even be that engaging in a creative activity may cause happiness. This is one of the theories put forward by the founder of the Flow theory, Mihaly Csikszentmihalyi. According to his research on highly creative people, he found clear indications that being able to engage in creative activities was something which brought those people immense joy and happiness. As he describes in an 1997 article in The Futurist:

For many people, happiness comes from creating new things and making discoveries.

This is true when it comes to work as well. Studies of people’s productivity by Theresa Amabile showed a direct link between people feeling happy on one day and having creative ideas which helped their work on following days. The opposite was also true: Having small, creative “wins” at work and showing that you were making progress was enough to make people feel joy.

Nonetheless, overall the research is clear. Being happy is likely to make you more creative and original.

So go out there, do something that will make you smile, and create something.

Why creativity is the future of your teams Gallery

Why creativity is the future of your teams

Can meditation help or hurt your creativity? Gallery

Can meditation help or hurt your creativity? 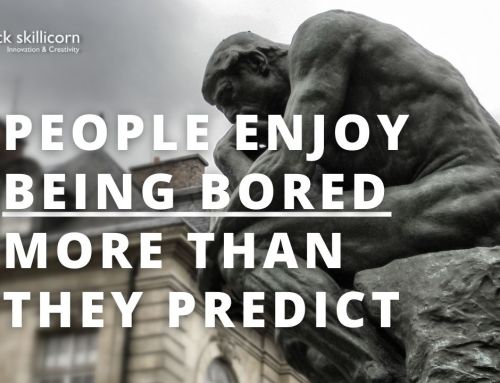 People underestimate how much they might enjoy just “thinking” Gallery

People underestimate how much they might enjoy just “thinking”